If you read my blog post from yesterday, then you are familiar with my iPhone App Store experiment. I built a simple application (a Flashlight), and now I’m trying to improve sales by listening to users and evolving the app – nothing more, nothing less. It’s a flashlight today, but tomorrow it could be anything.

During launch yesterday, A Flashlight! sold 13 copies, probably about half to friends and family who I coerced into buying it. While I haven’t gotten any feedback from real users yet, I did get some ideas from the Hacker News discussion that ensued. A thread full of people commented that the app could be construed more as a rave toy than a flashlight, with its ability to flash any color at any speed, and they suggested I work on syncopating the flashing colors with sounds and other people using the app. So, if I don’t get any more feedback on the matter, I guess that’s what I will probably do.

Beyond the pure experiment of responding to users requests, after I spent a day on Flashlight, I also got interested in applications around images and color and how I could use the Color Wheel UI element I cooked up. So, I decided to create a separate application called ColorWheel! As it says in the app description on iTunes, ColorWheel lets you select colors and then it provides you with RGB and hex values. It also lets you grab colors from photos, type in hex/RGB, email colors, and adjust the opacity of the colors.

Here’s a screenshot of the two apps side by side – as you can see, they are very similar. 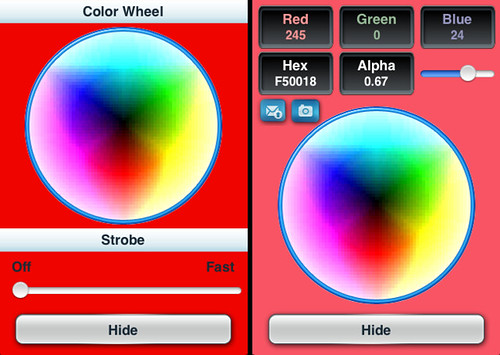 So, now this experiment has two forks. On the Flashlight side, we’ll see how response to user requests drives the development of the app and how that affects sales. On the ColorWheel side, we’ll see if my random idea for evolving the Flashlight speeds things up and leads me to a market faster. For both A Flashlight! and ColorWheel!, I plan to just respond to user requests, but I think ColorWheel is a much more targeted app (for designers, programmers, etc.), so I wonder what the difference in their evolutions will be.

As the final step in this experiment, I’m also pushing an app that starts out just as a feedback box. It’s ready to ship to the App Store now, but I’m just wondering what to call it. Blank Slate? Or maybe just TBD if I can get away with that.